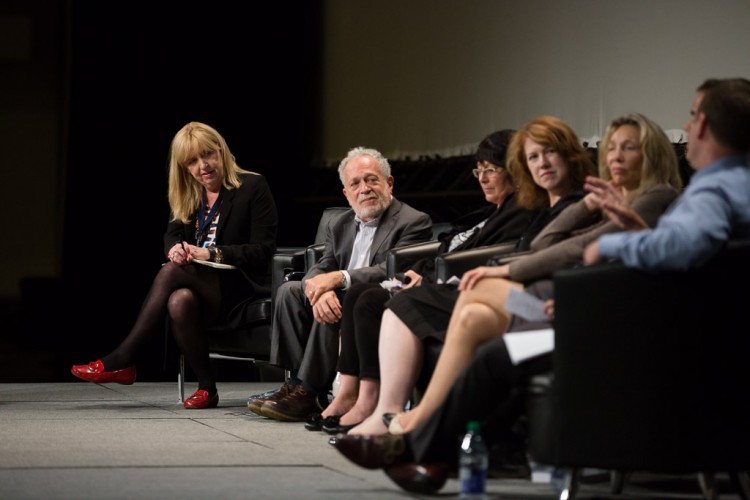 Robert Reich kicked off the discussions by stressing that the themes of this conference – inequality, democracy and the financing of government – are critically important. Connecting these dots is not typically done, he said, and he urged the audience to spread the word that they should be.

According to Reich, inequalities are becoming increasingly apparent is because the coping mechanisms society has used in the past to avoid facing what is the current situation are becoming exhausted. The highest levels of inequality in the U.S. and Canada, he said, occurred in 1928 and 2007. In both of the following years, he explained, debt bubbles burst. He said that we are rapidly heading back to these lows today in Canada.

The Broadbent Institute’s Jonathan Sas argued that we have a federal government that is actively worsening the situation with extension on limits to tax free savings accounts and income splitting. However, he said, the silver lining is that we have reached a tipping point and the current government is being challenged on these issues. To conclude Sas mentioned his role as a witness in the Truth and Reconciliation Commission. He encouraged the audience to read the document and speak to others about it. All Canadian political parties should be held accountable to it, he said.

Canadian Centre for Policy Alternatives’ Senior Researcher Kate McInturff began by pointing out the “irrationality” of not fully funding social services or ensuring workforce equality. One of the largest pay gaps is between Aboriginal and non-Aboriginal, she said, and this actually increases as the level of pay goes up. She also pointed out that women’s median employment wages have gone up over 20% in the last 20 years but this has been in terms of full time work.

She called for the acknowledgement that a lot of economic growth has happened in the last 20 years and it’s “not bragging,” she said, to acknowledge it is because of women. McInturff encouraged the audience to go to upfordebate.ca and sign a petition to ask political leaders to speak more to women. We must ask out leaders how their policies will take account of fact that women and men exist in the economy in different ways, she said.

Author and commentator Linda McQuaig pointed out that in the late 1980s there was great popular appetite for taxing the rich. 85 percent of Canadians supported this, she said. However, the Mulroney government proceeded to do the opposite and since then this has been the status quo. There was, she said, a gap between what the public wanted and what was being delivered in terms of public policy.

Now it seems the political world is catching up to the public appetite that has always been there. It has been documented that the concept of “trickle down” economics is not realistic, she argued, and the exciting thing is that there does seem to be something “in the air” pointing to positive change. She concluded by urging the audience to encourage the prioritization of in the campaigns for the upcoming Canadian election.

Public Services International’s General Secretary Rosa Pavanelli spoke about seeing examples from across the world of the difference between nations with good quality public services versus those without.  All over the world, she said, conditions worsen when wages drop because of the influence of multinational corporations on the government agenda and the global agenda.

She cited some African countries as examples of governments trying to attract foreign investment at a cost and countries in Europe as examples of trying to make profits without barriers. The costs outweigh benefits in these cases, Pavanelli claimed. She concluding by urging the audience to seek out more socially profitable investments in the future.

Jim Stanford of Unifor highlighted how wasteful it is when the rich spend on protecting themselves from projected inequality. There is a wealth of new understanding of all the ways inequality drags down the whole economy, Stanford said, and we need to build a greater confidence about economics among average, working class people. Economic literacy, Stanford stressed, is a form of intellectual self -defence.