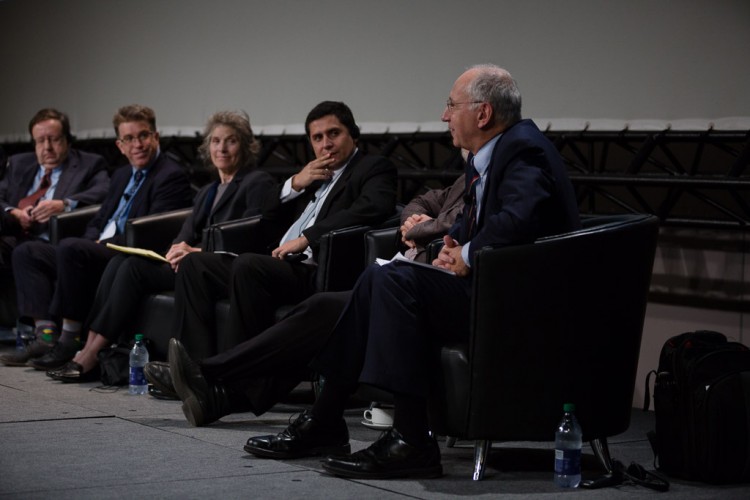 Tuesday’s panel discussion on tax fairness tackled tax inequalities within Canada and internationally. Moderator Daniel Bertossa, Director of Policy and Governance at Public Services International, introduced each of the panelists before inviting them to outline their visions for achieving tax fairness.

The Canadian Union of Public Employees’ economist Toby Sanger opened the discussion by focusing on the regressive direction the tax system has taken. He emphasized that while the tide is turning, more work needs to be done and only international cooperation will make the difference. One key way to address tax inequality, Sanger said, is to elect politicians who will support fair and progressive tax programs.

Queen’s Law Professor Kathleen Lahey took the discussion toward gender inequality highlighting that tax cuts hurt women and widen the gender gap at a dramatic rate. The current system, she said, keeps women in unpaid positions and deincentivizes them to take on paid positions — this, coupled with the lack of childcare in Canada, perpetuates the gender gap in Canada.

Senator Percy Downe focused the discussion on inconsistencies between convictions for domestic and overseas tax fraud — the Canadian government is aware of the billions of dollars owed in overseas taxes, he said, but no convictions have yet to take place. He asked why money is not being put into the CRA to reclaim this money. His practical solution to address inequality was to increase resources directed at reclaiming money lost in overseas tax evasion.

The discussion then shifted toward international cooperation, with the whole panel acknowledging it as a global problem. Luis Moreno, Coordinator of the Department of Fiscal Justice at the Latin American Network on Debt, Development and Rights, detailed the issues of inequality in Latin America and called for an intergovernmental body devoted to international taxation.

Organization for Economic Co-operation and Development’s Head of Tax Treaty Unit Jacques Sasseville stressed the importance of getting people cooperating toward a progressive solution, something he would expand on in his presentation that afternoon.

Dennis Howlett, the Executive Director of Canadians for Tax Fairness, echoed this sentiment, calling for a multi-lateral tax treaty and the closing of loopholes for high earners to pay less.

The panel addressed various problems and suggested possible solutions to tax fairness and equality, but as Lahey noted in her final comment, there is no simple fix to tax fairness — widespread cooperation is necessary.