Robert Reich: Inequality for all 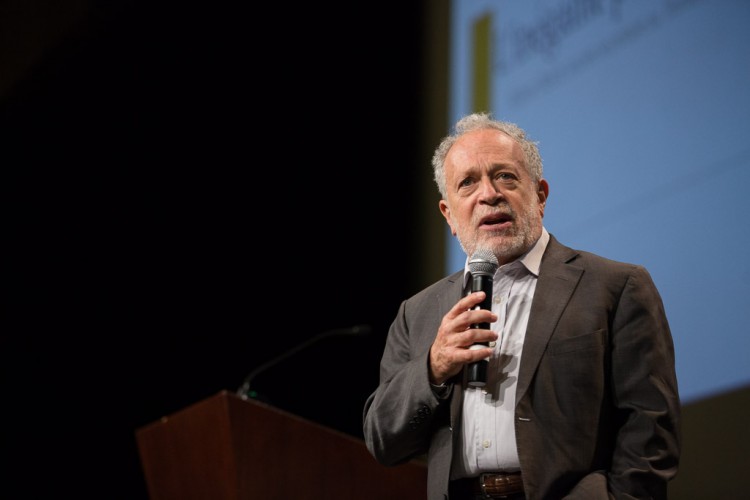 Robert Reich calls on Funding Democracy audience: “you are the change agents”

Robert Reich’s stirring keynote Tuesday afternoon injected humour into the unfortunate reality of income inequality in North America. Reich pointed out that in three decades there has been no increase to the median wage in the U.S.; if the median wage is going nowhere, he said, that’s a problem. Reich acknowledged that while inequality issues in the U.S. are more extreme, Canada does have a tendency to follow the patterns.

Contrary to popular belief, Reich said, economic growth is not the prerequisite to good jobs. The solution he suggested was supporting the middle and lower classes because their resulting purchasing power will stimulate growth.

Reich also addressed the issue of corruption. Political power that comes with a concentration of income and wealth at the top works against a functioning democracy, he said. The current system is a corrupt one.

Throughout his speech Reich disproved many economic myths in his discussion including:

As a solution, Reich looked backwards to the post-war decades when the U.S. and Canada were experiencing a time of widespread prosperity. He outlined the successful formula which included a high level of unionized labour, investments in the future including infrastructure and education, high marginal taxes on the wealthy and a financial system that serves industry rather than controlling it.

Change is coming, according to Reich, as more of the wealthy realize they would be more successful with a smaller share in a rapidly growing economy rather than a big share in a stagnant one. And as those not at the top discover the game is rigged, they will start saying no to the status quo.

Before turning to a brief Q&A, Reich closed his talk by issuing a call to action to the Funding Democracy audience. “We are on the cusp of change; let’s all help the change happen,” he said. “You are change agents.”