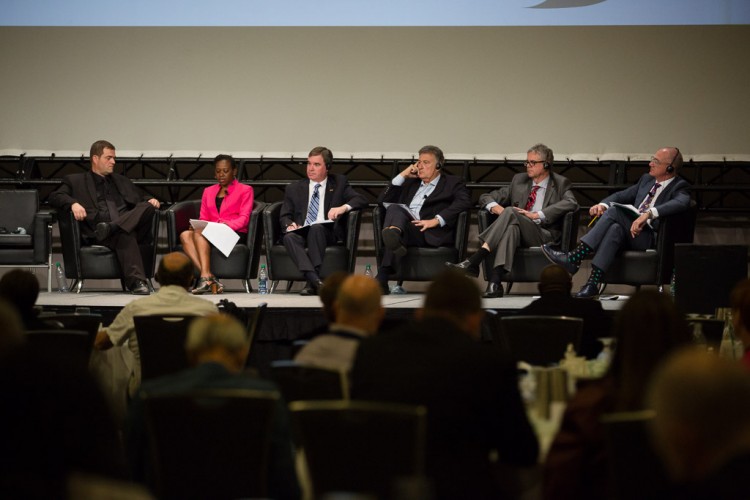 Public Sector Integrity Commissioner Joe Friday kicked off the discussion by defining whistleblowing for the audience as “coming forward with information that you believe to be true, which could demonstrate a wrongdoing could have occurred.” When wrongdoing is found, Friday says, it must be reported publicly to Parliament. Friday emphasized that the Office of the Public Sector Integrity Commissioner of Canada:

Friday asked why, if we agree it is the right thing to come forward and blow the whistle, it is so difficult to “do the right thing?” The stigma, he argued, should be removed with respect to disclosing wrongdoing; coming forward should be normalized.

David Yazbeck, from the law firm of Raven, Cameron, Ballantyne & Yazbeck, shared his belief from experience that powerful institutions often instil fear in their own employees to speak freely. Whistleblowing activity is, for Yazbeck, freedom of expression, and therefore should be protected by the Charter. Yazbeck argued we must first recognize and treat whistleblowing as a fundamental right. Second, a culture of openness and integrity must be fostered. Finally, he argued, it must be recognized that the most important party is the public and they must be well represented.

Sergio Hemsani from the Argentine Association of Staff of Supervisory Bodies, highlighted the importance of unions in society. He explained that from his organizations’ and Latin America’s point of view there are problems of governance at the root of inequality. He stressed the need for right officials to be placed into power, and for corruption to be tackled. He explained how his organization is working on a project at the international level that will work to uphold workers’ dignity and eliminate corruption. Hemsani concluded that citizens must see that public services are there to protect them, he concluded, and that the union is there to protect them. Concrete support for workers is necessary.

Richard Perron, from Syndicat de professionnelles et professionnels du gouvernement du Québec, explained that current affairs in Quebec over the past 10 years are marked by a series of scandals laden with corruption. In response, he explained, agents demanded greater protection for those who chose to whistleblow, and this catalyzed the creation of the Charbonneau Commission to investigate these issues. Now 80 percent of documents tabled at the Commission asked for the creation of a whistleblowing act. Inspired by unions, he explained, his organization decided to study the best practices when it comes to whistleblower protection legislation. He highlighted the need for a reverse burden of proof in procedure as well as an independent body to deal with whistleblowers.

Rebecca Suazo, from the Public Service Union of Belize, provided some insight into the Caribbean perspective and the specific case of Belize. Only Jamaica, she said, has whistleblower protection legislation, and there are limits to the effectiveness of the system. There are, she said, challenges related to its implementation. In Belize, she said, based on experience, there are some highly questionable practices in companies that must be exposed. She explained that Belize is a diverse country with a great deal of corruption. Issues including: the privatization of healthcare, prison and water; problems of access and affordable services; and corruption need to be tackled. The one thing Sauzo would change in her country, she concluded, is that whistleblowing legislation would be able to pass and whistleblowers would be protected.

Panelists agreed that a reversed of burden of proof standard would be beneficial. They discussed incentives for whistleblowing, warning against some of the dangers and advising that its effectiveness is context dependent. Finally, they concluded by agreeing that management should take responsibility for encouraging people to speak up.