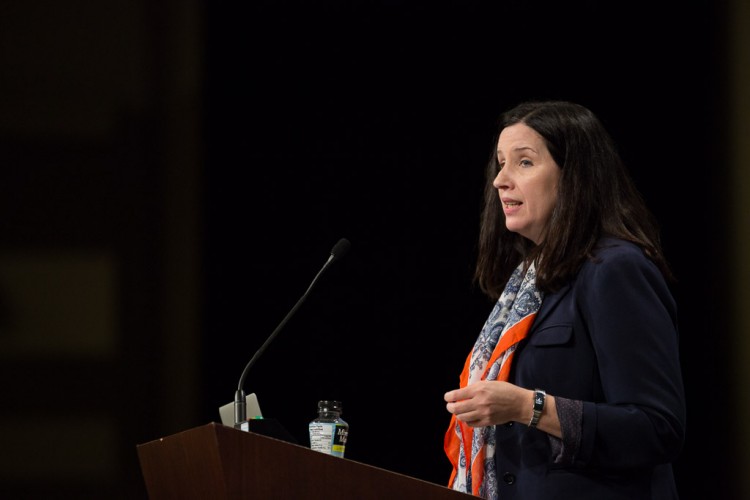 Trish Hennessy started her speech on the importance of maintaining democratic values by highlighting three successful policies that have had a positive social effect: universal public healthcare, C.P.P and lowering the cost of higher education.

These three policies have embodied what Hennessy calls the four pillars of democracy:

These pillars, Hennessy claimed, have become eroded over the past two decades leading to a democratic drift. According to Hennessy, “democracy thrives on dissent,” but voices of dissent are often silenced now before they can be heard.

Hennessy also identified austerity budgeting as one of the main components of democratic erosion. Starting in the 1990s, Hennessy pointed out, the focus on downsizing and “right-sizing” as a result of tax cuts has benefited only those with means and has been very harmful to middle and working class Canadians.

The recent recessions drew our attention to the benefits of deficits as contributors to public good. The demand from citizens to increase spending for social programs rather than emphasize tax cuts was a learning moment that has seemingly been forgotten. Hennessy called this the “deficit amnesia.”  She drew attention how such tax cuts are enabling social injustice by undermining the democratic pillar of representation and by focusing primarily on a disproportionally small percentage of the population.

Unions are the great equalizer, according to Hennessy, as they have the power to protect the rights of their workers, provide a democratic voice and ultimately enable public dissent without being silenced by government powers.

Hennessy ended her speech by addressing the importance of preserving and rebuilding the four pillars of democracy because they are the framework upon which future generations will build.