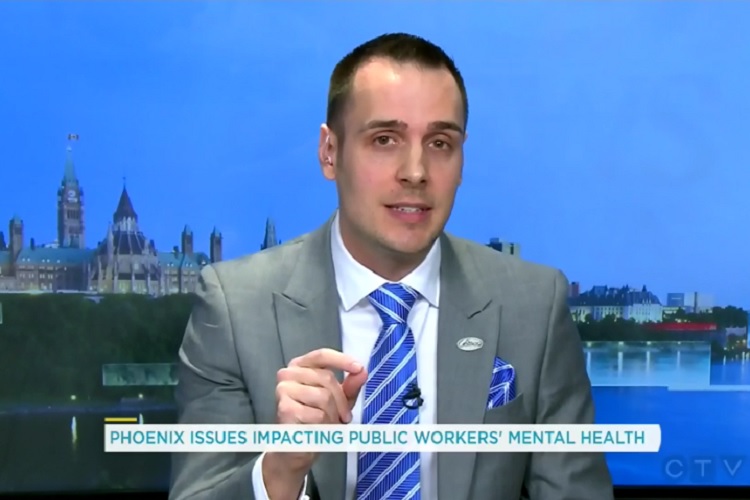 ACFO President Dany Richard was a guest on CTV’s national morning show Your Morning on December 15 to talk about ACFO’s FI Community Phoenix Impact Study and the ongoing impact of the pay system debacle. A transcript is available below.

Anne-Marie Mediwake: Dany Richard is the president of the Association of Canadian Financial Officers. This is the union that represents the financial management employees in the public sector. These are not the employees that administer the Phoenix system. These are also employees who are affected by the snafu. Dany is joining us from Ottawa this morning, good morning.

AMM: In your industry, how widespread are those Phoenix-related issues?

DR: Well that’s the thing. You don’t know who it’s going to affect. Every payday is like a game of Russian roulette; you don’t know who’s going to be affected. Employees are looking at each other saying, “who’s next on the hit list?” We’ve seen people that have not requested any change in their pay file, yet they’ve received several hundred dollars less or even more. Some people have come back from paternity leave and they didn’t get paid. Some people are coming back from sick leave and not getting paid. People are going on retirement and they’re terrified they’re not going to get their paycheque, their retirement fund. You don’t know who’s safe from this.

AMM: You know, we saw this in Omar’s story as well. This is more than just about dollars and cents, there are real people with real life situations behind these stories.

DR: Absolutely, there are lives at stake. People have financial responsibilities. People are having to max out their credit cards, cash in their RRSPs, re-finance their mortgages, I know members that are single mothers who’ve had to knock on their neighbour’s door to ask for money. This is completely unacceptable. If this were any other employer, there would be serious consequences, sanctions, and all that’s being done right now is we’re being told,
“We’re sorry, it’s unacceptable.” Well truth be told, our members are not being paid, sorries won’t pay their bills. We need some concrete actions to be taken, because at the end of the day, these are wages that are earned by these people and they deserve to be paid.

AMM: Dany, I don’t know if you’ll have the answer to this, but I’m curious why it seems that the politicians’ pay is not affected. They are essentially government employees, there are thousands of them…are politicians on a separate pay system?

DR: It’s the same pay system, but the thing about Phoenix is you never know who it’s going to affect. I do believe that this government is truly trying to resolve this issue, I do believe that, but we’re not putting enough resources into it to actually get this thing resolved, and that’s where it’s really frightful for us is, you don’t know who’s going to be next, so they’re not a separate pay system, but they could be affected next, but for everybody that’s not receiving their paycheque, they don’t want to hear about, “Here’s what we’ve done, we’re working hard for you.” They just need their money. I’d like to start by saying Prime Minister Trudeau last year sent an open letter to public servants saying we need to do establish faith in the public service, and we agree with them, but look where we are right now. It’s been two years that we’ve been without a collective agreement, inflation is eating up our wages, and to add insult to injury, we’re depriving people of their wages, of their paycheque. I’m thankful that our members are professionals, that they take pride in their work, that they still go in working every single day because they know that taxpayers are relying on them to maintain the financial integrity and stewardship of the public service. They respect their employer, they respect their colleagues, they respect the employees, but they’re not given the same respect.

AMM: Dany, you and your members are part of the financial industry, and I understand that you actually had a bit of input and some concern about Phoenix even before it was set up, so it must be very frustrating to now see all of these problems come to light.

DR: Absolutely. We first had serious concerns. Our union and many other unions warned the government that it was a massive undertaking. And we were re-assured, “Don’t worry, everything is under control.” And it wasn’t. In April, complete fiasco from the get-go, and then the government reassured us saying, “Don’t worry, everything will be resolved by October 31st.” We realize there’s going to be hiccups, so we gave them the benefit of the doubt, and what happened October 31st? It wasn’t resolved. We did a survey to our members—we’re accountants, we like numbers—and we asked our members, “tell us, how many of you are affected right now?” 72% of our members let us know that they had been affected in some way, shape or form with this Phoenix debacle. And more shocking is 85% of our members after that self-imposed deadline of October 31st were still having pay issues. So it’s not reassuring to us when the government is telling us, “Don’t worry, everything will be resolved in a couple of months, and even more worrisome is the T4s. As an accountant, I can tell you your T4 is a very important document, and having to get that straightened out with all these corrections, I’m seriously concerned about what’s going to happen in a couple of months.

AMM: As are we all. Dany Richard, thanks for joining us from Ottawa today.