“Clear choices” for a better Canada 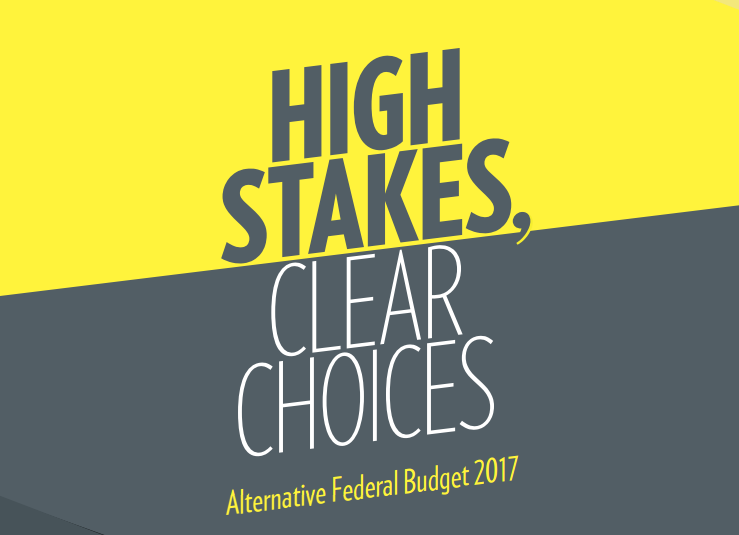 The Canadian Centre for Policy Alternatives has released their 2017 Alternative Federal Budget (AFB) with a series of common sense “clear choices” for investing in public services and improving the lives of every Canadian.

Titled “High Stakes, Clear Choices,” this year’s AFB is responding to a domestic and international political climate that rejected the status quo and is thirsty for real change. But as the AFB notes, “the rhetoric of fairness has never been enough.” The AFB offers decisive, tangible actions the government can take to “fix Canada’s inequalities through a fairer tax system, renewed physical and social infrastructure, and enhanced public services.”

With input from ACFO through the AFB Steering Committee, the chapter on public services begins with the staggering statistic that while Canada’s population has increased by 43% since 1983, federal public service employment has only increased 3%. Citing Phoenix as an example of the disaster that can result when governments “conflate the requirement for technological change with opportunities to cut staff,” the AFB calls for a reversal of over a decade of public service cuts and hiring freezes. An increase in staffing would ensure the government has the capacity to fulfill the promises it has made throughout its first year.

ACFO supports the AFB’s calls to hire a sufficient number of public service employees to provide quality service and enforcement capacity, and to create permanent employment opportunities rather than privatizing services and outsourcing contracts.

Protecting those who disclose wrongdoing

Of course, ACFO was also supports the AFB’s request for a review of the mandate of the Public Sector Integrity Commissioner. Whistleblowers provide an important service to all Canadians by helping to ensure the integrity and efficiency of the public service. They do this at a great risk to themselves and deserve to be protected, supported and encouraged.

A review of the current whistleblower protection legislation has long been an integral issue for ACFO, so we were pleased to submit our recommendations at the Government Operations and Estimates hearings last month. We hope that support for this review from sources like the AFB will further encourage the government to heed and act on the recommendations made to the committee to strengthen whistleblower protection.

We also strongly support the Alternative Federal Budget’s recommendations for simplifying and restoring fairness and stability to the Canadian tax system.

We commend the AFB’s recommendations to crack down on corporate tax exploitation and to tax international digital services, both recommendations that ACFO has also made in our Lead on Tax whitepaper.

Like the Canadian Centre for Policy Alternatives, we too believe the rhetoric of fairness is not enough. The federal government needs to take decisive, effective action to address inequality. There is no time to waste. The Alternative Federal Budget offers a progressive, pragmatic roadmap to combatting inequality and strengthening and stabilizing the economy. We hope the federal government’s own budget will be of the same caliber.