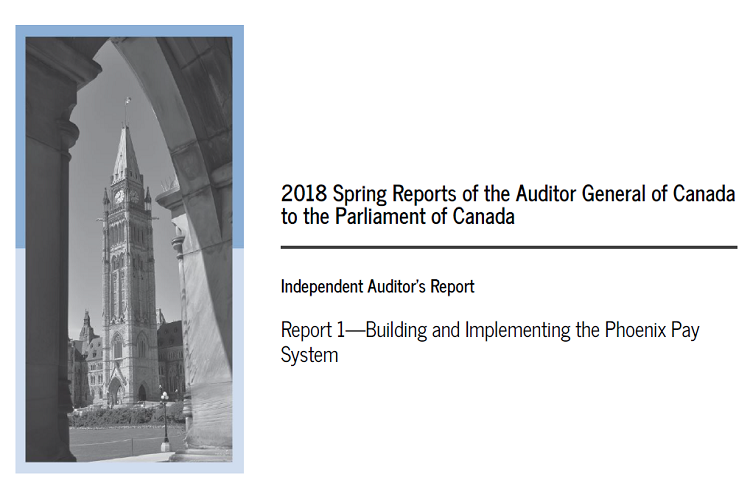 In calling the implementation of the Phoenix pay system “an incomprehensible failure” in his report yesterday, the Auditor General affirmed what many – including ACFO – have been saying since even before the system was deployed. We also share his hope that Phoenix be a wake-up call to government to finally address the “culture of obedience” within the public service, wherein public servants are pressured to implement programs they know to be faulty because senior management insists on implementing ministers’ programs without question.

We at ACFO have long maintained that financial management professionals in the public service have the skills, insight and experience to ensure projects are managed and implemented properly, and a commitment to doing what is in the best interests of all Canadians. But they must work in a culture that empowers them to bring their skills and experience to bear and that will be receptive to their honest assessment and feedback. That is one of the reasons ACFO continues to push for strong whistleblower protections, so that FIs who identify mismanagement in government are protected and supported when they come forward.

The breadth of the Phoenix debacle as depicted in this report comes as no surprise. As early as February 2016 ACFO was one of the public sector unions to warn the federal government that Phoenix was not ready to launch. And since the fall of 2016, ACFO has been conducting regular surveys of the FI Community to determine the extent of the impact of Phoenix on our membership.

We recently concluded our Spring 2018 study and will be releasing the full results shortly. However, we can say now that the situation continues to be critical: 83% of FIs who have experienced pay or compensation issues still have issues unresolved and more than 67% have multiple outstanding issues. Over 60% of respondents indicated that they have dealt with an increased workload due to Phoenix, up 7% from the previous survey. Finally, 56% of respondents reported that Phoenix had affected their mental health and well-being.

Determining what went wrong with Phoenix and who was responsible is integral to preventing future disasters and we acknowledge the importance of the Auditor General’s report. However, ACFO will continue to use the results of our survey to put pressure on senior management at PSPC and to advocate for a solution to ongoing Phoenix problems faced by our membership right now.

If you are experiencing issues with Phoenix, we encourage you to contact Labour Relations at labourrelations@acfo-acaf.com or 1- 877-728-0695.