Quality public services for all on International Workers’ Day, 1 May 2013 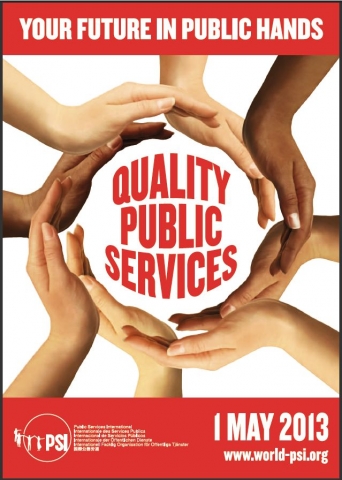 Your future is in public hands – quality public services for all!

The international labour movement celebrates 1 May in memory of the activists who were killed in the Haymarket massacre of 1886 while demonstrating for the eight-hour work day. Today, using the pretext of the economic and financial crises, neo-liberal forces around the world are determined to eliminate workers’ right to bargain collectively and hard-won social and labour rights.

Workers and our communities are uniting to turn back the wave of measures being used to increase privatisation, claw back public spending, reduce the size and role of the state, and to attack social dialogue and collective bargaining in public sector workplaces.

Public Services International General Secretary Rosa Pavanelli says: We cannot accept a future which offers decent jobs for only the lucky few and precarious jobs for everybody else; where the exploitation of women, young workers and children is the norm and millions of undocumented migrant workers labour under unacceptable conditions.

We have a responsibility to future generations to protect trade union and social rights. We must join in collective action to ensure that in the future quality public services will be available to young and old, generating social justice and equality for all.

Women and young workers are bearing the brunt of budget cuts and austerity measures. The long struggle for women’s equality has been set back by cuts to public services and institutions that promote equality for women at work and in society. Young workers are not provided with appropriate training and are excluded from the labour market.

Public investment in public services, infrastructure and industrial policy boosts sustainable development, stable growth and good and decent jobs. However, funding for the public sector is being reduced at an alarming speed. Taking effective action against tax fraud and putting in place progressive tax systems would provide the funds to build strong public services.

In many parts of the world, trade union rights for public service workers continue to be violated by outright bans, restrictions, the misapplication of essential services and violence and intimidation. These attacks on trade union rights are an assault on democracy and social development.

At the International Labour Conference in June 2012, the employers’ group blocked the work of the Committee on the Application of Standards, claiming that the experts do not have the authority to interpret conventions – and refuse to discuss any cases linked to the right to strike, which emanates from ILO Convention 87. This strategy by employers aims to destroy the ILO supervisory system. Negotiations continue into 2013 to resolve this deadlock.

Pavanelli says: The International Labour Organization was created in 1919, as part of the Treaty of Versailles that ended World War I, to reflect the belief that universal and lasting peace can be accomplished only if it is based on social justice. Let this belief guide us today. PSI calls on our affiliate union members to engage with their governments and social partners in the lead-up to the ILO conference in June 2013.

PSI continues to fight for freedom of association in Algeria, Guatemala, Korea, Turkey and any other country where there is injustice. Now, more than ever, we must stand united and strong to protect workers’ rights.