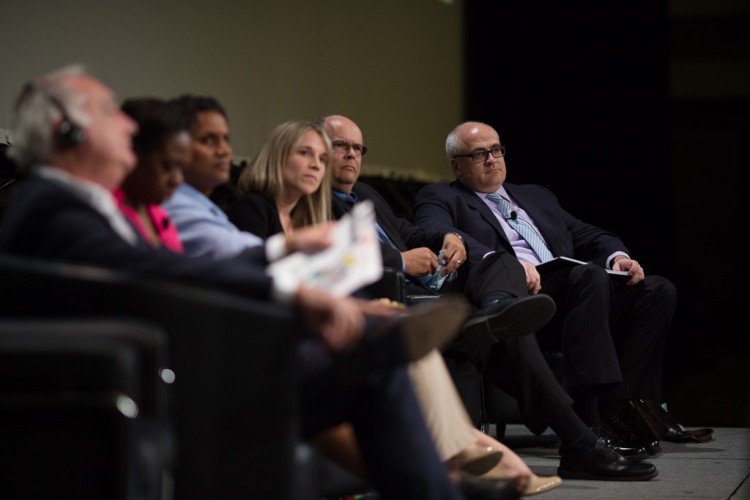 Moderator Jürgen Burxbaum of Public Services International opened the final panel of the conference by highlighting a common misconception of corruption: that it is simply bribery or illegal payments. He emphasized that there are several activities that fall well within the law that can easily be considered corruption, such as lobbying, personal networking and financing of political parties.

The Funding Democracy panel addressed both small and grand corruption. Peter Dent, Chair of Transparency International Canada, began by emphasizing the importance of understanding the full cultural impact of corruption. Even when addressed at the largest level, he said, it cannot be fully eradicated without acknowledging the reality of corruption in everyday life. Compliance programs that target corruption in the workplace have no jurisdiction for corruption at home.

Sgt. Patrice Poitevin took a similar approach when broaching how to deal with corruption, stating that if small corruption goes unpunished, how can we justify that grand corruption is unacceptable? A lack of moral authority within an institution creates a vacuum which leaves room for large scale corruption such as organized crime to survive and thrive.

Akaash Maharaj took a somewhat contrary stance concerning small versus grand corruption. Although corruption occurs on all levels of society and as such must be addressed on all levels, he said, grand scale corruption requires special attention as the consequences of grand corruption are so large that they are “an affront to human decency.” The way to combat corruption, according to Maharaj, is to start with leadership and create a culture that rejects corruption and that can expose kleptocrats as fragile figures who can be overthrown overnight, rather than invincible rulers immune to the consequences of corruption.

Kady Seguin, Acting Director of Publish What You Pay, spoke of the importance of openness and disclosure of payments made by large natural resource corporations to governments and vice versa. This disclosure, Seguin said, would allow citizenry to stay informed about the management of collectively owned resources. Sequin highlighted the importance of fighting corruption at the highest level and ensuring that natural resources benefit the citizens who own them.

Also coming from a perspective of privatized industry, Rebecca Suazo discussed the difficulties involved in eliminating corruption in the private sector. Using the recent privatization of the prison system and the declining quality of life for inmates in her home country of Belize as an example, Suazo emphasized the importance of Canada and other world leaders in equipping other nations with the tools and information to combat corruption.

Secretary General of the Association of Staff of Supervisory Bodies Hugo Quintana closed the panel by emphasizing the importance of summits like the Funding Democracy in sparking the change required to combat corruption. Sharing experiences and acknowledging the asymmetrical power