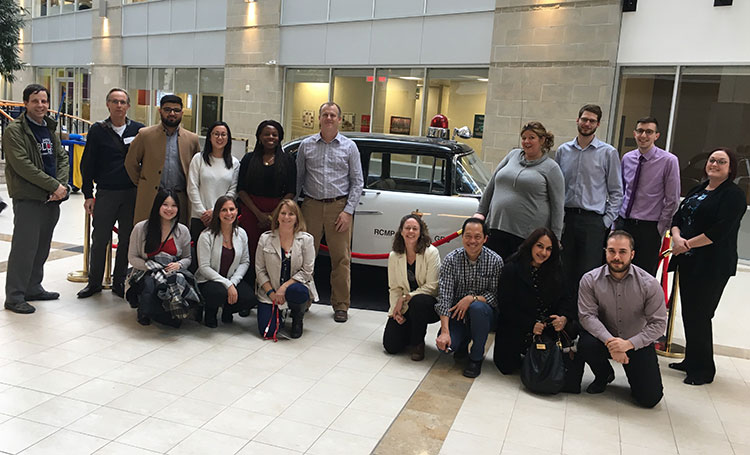 ACFO concluded this year’s Interchange Program in February. The two last rounds saw 20 FIs from eight regions in 12 departments coming to Ottawa for a week to get insights into work processes in the National Capital Region and network with other FIs. Each group had a week packed with informative activities and presentations on topics of financial management and career advancement.

One batch of 11 FIs was in Ottawa from February 6-8. Participants visited and did job shadowing at the RCMP headquarters. They were also treated to presentations including one on dealing with difficult situations offered by Mike Lionais, Executive Director of the Office of the Comptroller General.

Other presentations included one on deconstructing biases to achieve effective communication; and another on what is expected from FIs at different levels. There was also a preview of the Financial Management Community Career Development Portal. The round that followed received these presentations as well.

Like other rounds of the Interchange Program, this round included a social mixer to help FIs grow their network with both FIs from other regions and NCR.

“I enjoyed being able to meet with colleagues in the FI community from different departments and levels. This allowed me to share best practices and learn from them as well,” participant in the third round.

Participants in the fourth round.

The fourth and final round of the Interchange Program was made up of nine FIs from the regions and was in Ottawa from February 27-March 1. FIs in this round did job shadowing at Statistics Canada where ACFO Departmental Representative Sean Kew FIs gave a presentation on PowerBI, a tool which allows FIs to create dashboards for their clients and use their data to provide a high-level, one-page summary including graphs and visuals.

“I very much appreciated the opportunity to get this training. It was one of the most useful types of training I have received in the public service. I wished I had this opportunity earlier in my career as this really inspired me to implicate more in my current job as well as future career aspirations,” said a participant in the fourth round.

Participants in the third round

Participants in the fourth round

The Interchange Program is funded by the Joint Career Development Program (JCDP), a one-million-dollar professional development fund exclusively for the FI Community. The fund was secured by ACFO during the last round of collective bargaining negotiations and is managed by ACFO and the Office of the Comptroller General. You can read about the first round of Interchange Program here and the second round here.

We hope to bring the Interchange program back next year; the next application period will be communicated to the membership in the coming weeks. If you have questions or comments about the JCDP, please contact us at jcdp@acfo-acaf.com.